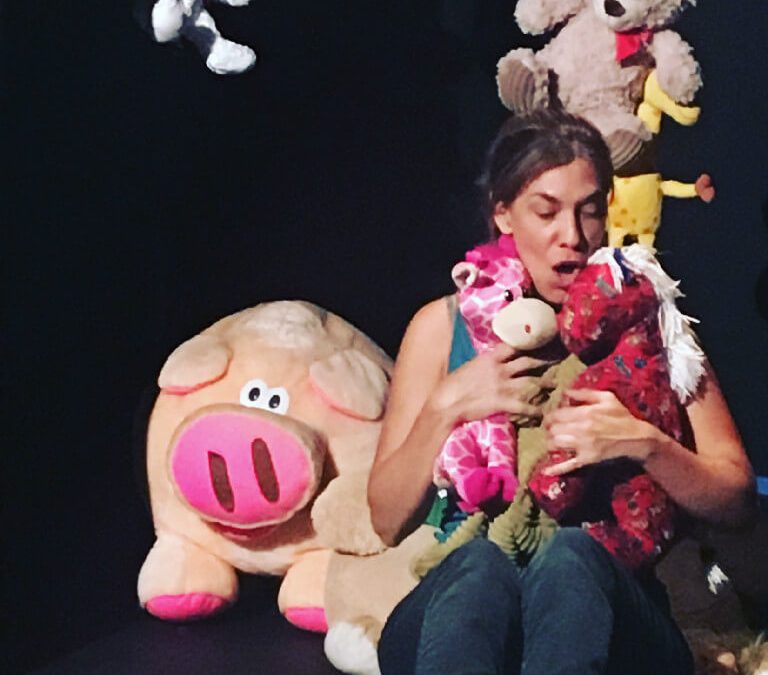 Revealing the innermost workings of her heart and the devotion she has for the fostered and adopted animals she has supported over the years, playwright and solo performer Lisa Wharton’s multilayered Strays is lovingly crafted.Wharton, adopted at just 17 days old and then a second time as a youngster by her stepfather, brings a unique perspective to the unspoken fears and trepidation that must inhabit the mind of a homeless animal.

Her childhood seemed quite perfect at times. And yet, unpredictable betrayals by the fathers she assumed were her support system threw her world into utter chaos. It’s a tribute to Wharton’s inner strength and determination that she now leads a life so well-adjusted, positive, and more than obviously successful.Even more admirable is her ability to transfer that strength into a mission through which she lifts up the lowliest of creatures. As Wharton details her various experiences with rescue animals, she treats her audience to the humor, the frustrations, and even the pathos that comes along with committing one’s time, talent, and treasures to such an undertaking.

Through her various characterizations and with the assistance of photos and videos clips projected on an upstage wall unit, Wharton ingeniously introduces us to her “family.” There’s a darling tabby-marked feline named Boo and a Benji-like dog named LadyBug. Via some pretty funny anecdotes, we learn that these two are presumably in complete control of the Wharton household. And then, one day, along comes “Freeway.” Probably won’t take anyone long to figure out how and from where this little guy came into the picture.
Wharton also regales the fostering of a larger, multibreed dog named Luke she rescued from certain death and nursed back to health and for whom she was able to eventually secure a loving home with a well-vetted family. Here is where we are invited by Wharton to dig deeply into what it takes to raise, nurture, and finally set free another being. It speaks volumes as she parallels it with having finally had the opportunity to meet her own birth mother.

Director Lisa Nicole Lennox clearly has a personal stake in developing her excellent connection with Wharton and her material. Lennox’s set design consists of a number of moveable pylons, which Wharton makes good use of in revealing hidden treasures and creating various locales. Likewise, Donna Willett’s lighting creates a number of uniquely separate playing spaces in this intimate venue.

And finally, lest one think that this production is presented only for the purpose of advancing Wharton’s message, it is noteworthy to add that the benefits will quite literally live on. Wharton, Lennox, and all associated have created this piece as a commendable effort to raise funds and are donating 75 percent of all ticket sales to be distributed to two different animal rescue organizations. What they offer is a touching piece worth seeing and a worthy cause that touches others.
November 17, 2017